February 29, 2020 Travel Comments Off on Manila to Villa Escudero day trip by Bus

Villa Escudero Resort is famous for its waterfall restaurant. It is located approximately 100kms away from Manila. The resort offers day tour packages for anyone who want to come and visit the resort. The package includes access to museum (Escudero family collection), buffalo cart ride and also for waterfall restaurant lunch.

This resort is located at Quezon province. From Manila the buses goes to Lucena city goes through this resort. From Buendia location of Manila, plenty of buses goes to Lucena. I choose to travel with JAM Liner bus. JAM Liner has own bus terminal in Buendia. This bus terminal located just below GIL PUYAT LRT station. Infact we can see this terminal from train itself when it comes near to GIL PUYAT station. One side of this GIL PUYAT station is JAM Liner terminal and diagonally opposite JAC Liner terminal located. They also have buses to Lucena. Not sure about frequency but i heard every 30 minutes there will be a bus to Lucena from this area.

When i enter JAM Liner terminal there was a bus with board Lucena. When i go near by the conductor asked me where i am going. I told him to drop me at Villa Escudero. Then he asked me to sit inside bus on a available seat. He spoke very good English. All buses they had were Air Conditioned. It was very chill inside. Bus started in 5 minutes after i entered. Once it started moving the conductor come to every passenger and issued ticket without collecting money. Once he gave ticket to everyone he comes back second round to collect money. The ticket cost is 166 pesos. The ticket mentioned ‘Villa Escudero’ as stop name. In actual there was no proper bus stop in Villa Escudero. I read in forums that we need to inform driver in advance so they stop at Villa Escudero location entrance. Bus started approximately around 7 AM and arrived at Villa Escudero around 10:30 AM. There are some places on the way the traffic was too slow moving. So it took 3.5 hours to reach the place. They played Hollywood movies all the way.

Once bus crossed San Pablo city i had Google Maps active to track the location as it is located close by. Once bus reach near to the place the conductor called me to come front and he stopped the bus near to the entrance and showed me the way i have to go.

This resort located approximately 1 kms inside from the main road. From main road nothing visible except a board saying “Villa Escudero 1 Kms”. There was a security guard. And there were some mini auto vehicle with drivers in it. When i approached one he asked me to pay 50 pesos to drop at reception. It was quite a long distance. It was good village atmosphere all the way. Once he dropped me at reception i asked them to give me a day pass. They charged me 1600 pesos on my credit card and gave me a set of tickets. A guide take me to Museum and told me how to proceed to next locations in the resort and then he left.

The museum is church converted one. They modified the church as museum. When i enter the museum all i saw is Jesus statues and some statues explains Jesus last walk. It was a beautiful interior. But the museum started getting more interesting on the next further sections. They had wine jar taken from a sunken ship dated 300 BC. And so many coin collections of various countries dated very old. Even they had Indian coins dated 1927. Some coins of Indian section were belongs to various kingdoms ruled Indian land in previous centuries. Likewise they had collection of coins of various countries which are from centuries back. Really unbelievable how Escudero family got all this treasures of history. Some ornaments made of ivory dated BC 200 all quite interesting stuffs to see.

Then a buffalo cart ride took us to the falls area where the lunch was served. The lunch timings were 11AM – 2PM. As it was a Saturday there were plenty of people visited so they kept buffet in 2 locations near the falls. The items were same in both the places. Some items were very tasty. Had very good lunch in there.

After lunch they said at 2PM there will be a cultural program to watch which will last for an hour. As i ate too much i felt so sleepy and i decided not to stay there further and started my return journey. Again same buffalo cart ride took me back near to reception where another mini auto guy took me back to main road for 50 pesos. As soon as i reach main road i asked the security guard if the buses goes to Manila stops here or not ? He said he will stop a bus for me and he left his lunch in the middle and come to main road to look for bus. I told him i have to go to LRT Buendia stop. There were frequent buses to Manila from there… but not all goes to LRT Buendia stop. Within 5 minutes of time a bus came with Buendia board. As soon as he wave hand they stopped bus there. This bus is LLI (Lucena Lines Inc). This bus interior looked better than JAM Liner. The return ticket costs 168 pesos. Again a long ride to Manila because of slow moving traffic. They stopped near GIL PUYAT LRT station where i board the JAM Liner in the morning.

Overall it was a worthy place to visit on a day trip. 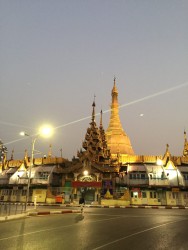 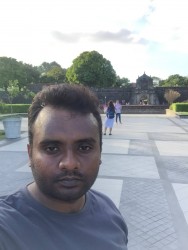