Most of the people here speaks very good English from Taxi driver to bus conductor. So language is not a issue. The public transportation is very good in the city. I brought ‘Beep Card’ from a vending machine and used it on LRT (Light Rail Transport) which connects major tourist attractions in the city. I think the card costed 30 pesos. When i paid 100 pesos teh machine gave card with 70 pesos value in it. Each ride costs between 13 pesos to 16 pesos. Not sure what is the factor they used in calculating the price.

In airport i brought SMART Tourist SIM card which costs me 349 Pesos which offered 4GB of general data and 1GB for social apps for a total of 7 days. The coverage was very good. There was another network provider ‘Globe’ also had many kiosk in the airport. Was able to roam around nearby streets with the help of Google Maps.

There is no Uber in Manila. But the alternate app ‘Grab’ was so useful and easy to use. It worked almost as same as Uber and prices were affordable as well. When i inquire hotel about airport pickup they asked 2000 pesos for it. With grab app i reached hotel in 163 pesos from airport 😀 😀 😀 They had wallet system in the app. So i added some money from credit card and used it further on my taxi rides. so never had to worry about having exact change in hand. They also had food order option in this app and it looked like ordering in Zomato… but the delivery charge was high. 59 pesos delivery charge for a restaurant located in next street 😀

Philippines is a christian country. More than 80 percent of population are Roman Catholic. So churches can be seen all around with saint statues. Some of them got stunning architecture. Such a treat to eyes.

Rizal Park is located near to United Stations LRT station. The park has music light show in the evenings and many people assemble here to see it. Fort Santiago was a good place to visit but for me it does not looked very impressive. The entry fee is 75 Pesos. SM Mall of Asia is one great place for shopping and relaxing. SM by the Bay area flooded with plenty of amusement games. Manila Bay Walk is also nice but plenty and plenty of vendors annoy for various services. 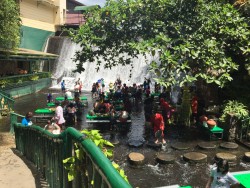