Livingstone – The border city of Zambia which includes a small portion of Victoria falls. In fact to visit Devils Pool in the falls, the only way is through entering Livingstone only.

The city was named after David Livingstone, the British explorer who claimed to discover the Victoria Falls. But my tour guide and guide in the Livingstone Museum both told that the local people in the village took him to the falls. But he took the credits for himself by writing the history that way 😀 😀 :D… Just British things…

My trip to Livingstone city of Zambia is just a Day trip from Victoria Falls, Zimbabwe.

It was sweet to see Zebras crossing around casually.

Spent most of my time in Livingstone Museum where they have plenty and plenty of historical collections of Zambia as well as personal belongings of Livingstone. The guide there was very interesting and almost 2 hours explained me about each and every stuff from the museum. Same as India, Zambia was also under British rule for a while and the method British used to capture Zambia is also as same as the way does with India. They established a company to make trade and slowly take over the land. As like India they too have a history of steps to Freedom.

The king of Zambia was there on the day of my visit for a ceremony. Once we heard my tour guide was excited and request me if we can go to see him. I too was interested to see so we went to the church he was attending prayer. They told it was the second time in his whole life he is visiting that church. There were no much security. Only servants of him and a couple of police officials around there. When he comes out of church everyone was on their knees. My guide said it was a tradition followed for years and people does it till date.

Surprise to see Airtel is one of the leading telecom operator in Zambia. 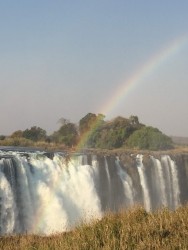 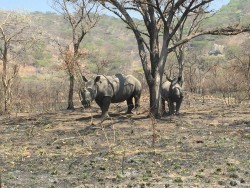