IMPORTANT: GOOGLE, FACEBOOK SERVICES WERE BANNED IN CHINA. DO NOT DEPEND ON GOOGLE SERVICES SUCH AS ‘GOOGLE MAPS’ AS IT WONT WORK ON CHINESE NETWORK.

Beijing – The capital city of China is filled with awesome people. I really didn’t expect this much love from Chinese people when i get there. Recent few days Indian & Chinese media’s were spreading hatred between each other on border issue. I was little worried if that impacts my visit. But people there show me lot of love. Greet with smile. Many people came and took selfie with me… lol… 😀

Especially when i was there at ‘Tiananmen square’, where there is a lot of people with Chinese flag watching Flag event at the evening,  i see a set of youngsters looking at me and talking something… i was worried as everyone hold Chinese flag in hand and looks little rough. Suddenly everyone starts walking towards me and i was feared for a second. They came and give shake hands and say hello and leave with a smile

Metro is the convenient way to travel in Beijing. It is cheaper too. When i asked for Airport pickup from my hotel they asked me 400 Yuans for that. It is so costly as i did see some website says 140 Yuans is the average price for the location where my hotel located. They said this price difference is because the hotel will send a English speaking driver which is very rare in Beijing. So i decided to use public transport by myself and save money as i do see a ‘Airport Express’ train service which connects PEK airport and City Center. I found it was super easy as the Beijing Metro use English along with Chinese everywhere. I purchased Beijing transportation smart card which costs me 20Yuan deposit(Refundable) at Airport. And we can topup with any amount as per our need. Airport Express costs me ’25 Yuans’ to reach Dongcheng city center. Again i happened to take 2 metro lines (interconnected) to reach my hotel area. I just spent only ’28 Yuans’ to reach my hotel by Metro. I saved ‘372 Yuans’ by choosing public transport.

The only thing i felt bad on Beijing. KFC saved my life there. The cost of food is little high compared to India. Though things costs in few Yuan’s when i compare it with Indian Currency exchange rate the food items sounds costly compared to India. KFC Medium combo meal costs 45 Yuans which is almost double of for what it was sold in India. 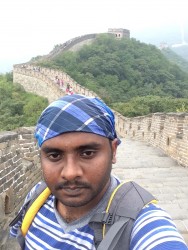