India – Pakistan border is pretty famous for Border Retreat Ceremony event happens everyday evening. Plenty of people arrive here both the side everyday to see the flag off event and cheer for the parade of their nation. I didn’t expect this much crowd. In Indian side the stadium was almost full. Only VIP section of the stadium was little free.

In Amritsar around Golden temple area and Jallianwala Bagh locations there will be people come and keep ask ‘want to go wagah border ?’ with different options for us to choose to travel with.

We were approached by a guy asking INR 100 per person for going and coming back and the vehicle will be auto. We were surprised as the google map shows it is nearly 30Kms and they asked only INR 100 for onward and return journey. Then we got to know they take the auto only when they get atleast 8 people in it. So we had to wait for another 30 – 45 minutes until they get enough people to start journey. There were 10 people in our auto including driver. It was a big auto but still we had to adjust and sit. Journey took nearly an hour to reach border parking area.

Approximately 8kms before itself the flag of India and Pakistan were visible on road as it is just a plain straight road. There was a huge parking complex near to the border but the auto parked us about half km before that in a private parking complex made for the autos.

We took a cycle rickshaw from there to go to the place where the security check takes place. There were massive crowd in several queues moving slowly for their turn to go under security check and enter stadium. We stood nearly 30 – 45 minutes to pass this queue. Once we pass the security check we walked nearly half km to enter the stadium. Plenty of small shops selling popcorn, cool drinks, water, souvenirs, etc… Once we enter stadium there were rush in getting best place to sit and watch. People came earlier than us already took front rows. We sat nearly 1.5 hours until the parade starts. It was toooo hot in there.

Our maps application shows we were inside Pakistan. When the event starts the first thing they did is… they invite women volunteers from the crowd and gave them flag and asked them to go on march towards Pakistan waving Indian flag. And then they play songs and the women volunteers performed group dance. Then starts the BSF Jawans parade. It was a treat to watch.

Once the event finished people were started moving off the stadium. Actually our part of stadium is little far from border line. The VIP gallery was more closer. Me and my friend jump over a fence to enter the VIP gallery and gone as close as possible to the border gate. There were few people did it so we also jump and go. As there was lot of crowd the BSF Jawans were focused on clearing the crowd. We could not able to go to the final border gate as the fence near to that has got 3 army soldiers monitoring it with machine guns. So that was the last point we were able to reach. We saw the border approximately 5 steps away from the final gate of India.

We spent more time and then we returned to our Auto parking area. Surprisingly auto guy was waiting for us without hurrying up though we are the last one to arrive and 20 minutes late than the time he told that we should have arrived. Once we arrived the return journey started and we were asked to sit in the back side of auto facing backwards. It was nice view. This time only 8 people in auto including driver. So the seat was comfortable and the view was absolutely nice. They dropped us back near Golden Temple area.

I went to this city thought of visiting the famous ‘Golden Temple‘ and the historic landmark ‘Jallianwala Bagh‘ along with Wagah border visit. But after reaching the city i got to know the city’s important role during India – Pakistan partition through a co-traveler on the way from airport to city on a Free bus ride offered by Golden Temple management.

He told in Punjab people won’t celebrate Aug 15 (Independence day) as the state lost millions of life during the riots happened during India – Pakistan partition at that time. He also advised me to visit ‘Partition Museum‘ in the city to know more about it. The museum located very near to Golden Temple and the entry fee for Indian national is INR 10 only. I visited twice as there exists so many things for us to read. The museum shows the trouble happened during India – Pakistan partition.

Recently in a Salman Khan movie ‘Bharat’, i saw a scene where he used to help his father in a railway station which located inside Pakistan province and a train arrives in the station with no one alive. Everyone in the train were brutally murdered. I thought for the sake of movie they have created this brutal scene. But after visiting this museum i got to know those are not just imagined scenes but the real happenings during the partition of British India into India and Pakistan.

The city Amritsar is located just less than 60 Kms distance from Lahore. During the partition the border line was drawn at ‘Wagah’ village which located in middle between these two major cities. So Amritsar is the port city for refugees who came from Pakistan and it is the last city for the people to go to Pakistan. It is the same way at Lahore. It was the port city at Pakistan end. The Lahore and Amritsar train stations played major role in migrating people from one station to another. Sometimes when riots gone wild the train starts from Lahore and reach Amritsar with most of the people got brutally killed. And the same on the other direction as well. Crossing this 60 kms is life or death for any one wanted to cross it for their life.

There were many people choose to walk all the way from Lahore to Amritsar and vice versa as  when millions of people migrate there were no enough transport options and the time is limited. At initial stages when the actual border lines were not drawn people lived between these two cities lived in fear as if their place is India then the Muslims has to leave and if the place is marked as Pakistan then the Hindu people has to move. Else they will surely has to face mob attack which probably result in death.

Many people have left their property and left the country for their life. There were letters written by such people to the newly formed government in search of their loved ones, their hard earn property, etc…  will melt our heart. I read some of the letters. A guy wrote letter to his boss asking if he can help him someway as he left all his property when he have to run out of country along with his family. He also mentioned he unbelievably survived the mob attack and reached a refugee camp. He also mentioned in that letter that they had to kill their own sisters to avoid them being captured by the mob and raped. Many women jumped on the well and killed themselves for their honor.

Plenty of videos taken during their migration was kept till date. The survivors were shared their experience on videos and it was played all over the museum. A guy told that when he traveled from Lahore to Amritsar all the way he saw is only dead people scattered here and there. Not sure from where but i heard this partition is proposed by British to make this type of unrest in the country. But the museum shows some evidence that the British authority Mount Batten actually proposed ‘United India’ and in fact he tried to convince Muhammad Ali Jinnah for this ‘United India’ concept in a meeting. But ‘Muhammad Ali Jinnah’ is not ready to give up on his ‘Separate State for Muslims’ concept at any cost which results in British have no other way but to partition India into Hindu and Muslim lands. Which later triggered riots in the state of Punjab and Bengal regions and costed millions of people their life. 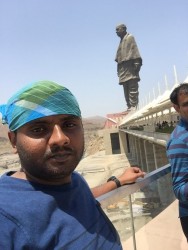 Statue of Unity – Tallest statue in the world
30 Apr